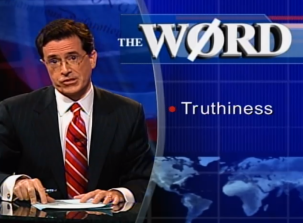 One of the many negative things to come out of the 2016 presidential election campaign was a brazen indifference to truth by both the two major candidates.  Hillary Clinton, and even more so, Donald Trump, would state outright falsehoods and repeat them ad nauseum, even after fact-checking had demonstrated the statements to be false.  Such persistence can only be described as lying.  And yet, among their supporters, none of that mattered.  People were committed to supporting them in willful disregard of their falsehoods.  This phenomenon has given rise to the idea we are in a “post-truth” environment, where “truthiness”—the view you know something is true because you feel it in your gut rather than because it conforms to known facts—is now predominant.  People are increasingly starting to ask, “How do we live in a post-truth world?”

The answer is simple:  We live the same way we did (or should have been living) before we coined the term, “post-truth.”

The phenomenon is real but it is not new.  In any event, I don’t much care for the term, “post-truth.”  “Post-truth” implies there was some day and age when society was committed to the truth, but now we are not, hence we are post (i.e. coming after) truth.  Progressives would like to think that such a golden age of commitment to the truth corresponded to the Obama years.  That is nonsense.  Conservatives would like to think that such an age was before the 1960s.  That is nonsense too.  In reality, if there was a Golden Age of commitment to the Truth, it probably was before the Fall, since, as the Apostle Paul records in Romans ch. 1, mankind has been stubbornly suppressing the truth in unrighteousness since then.  We just do it in different ways in different times and places.

But isn’t there something new about what we are seeing today?  I would say yes:  it is the ripened fruit of cynicism and disregard for any kind of authority—epistemological or institutional—that has been growing for some time (a roughly three centuries, in fact).  Epistemology is that branch of philosophy concerned with how we know what we know, how can we have certainty and how we deal with uncertainty.  This may seem esoteric, but it is eminently practical.  Moreover,  how one determines what constitutes an authority in knowledge affects how we shape our religious, social, and political institutions to sustain, perpetuate, and extend that knowledge.  If there is no authority higher than ourselves, you end up with a dissolution of society characterized by the sad coda to the Book of Judges, “…Every man did that which was right in his own eyes” (Judges 21:25).

The assault on truth and authority began in the mid-17th century.  After the Wars of Religion ended in the mid-17th century, asserting a religious basis for truth was largely discredited.  Enlightenment thinkers of the following century optimistically felt they could construct a new basis for all human understanding, independent of institutions and revealed religion.  Man, starting with himself autonomously, could determine the measure of all things.  This made all questions of modern philosophy essentially epistemological questions:  what constitutes the foundation for understanding everything if that foundation is not religious revelation?  The modern world, as we now know it, is the troubled heir of that question.

One can trace this through the history of philosophy since the 17th century, but for Christians this can be best seen in the vehement attacks scholars have made on the Bible since the 18th century.  This typically goes under the label, “critical scholarship,” but its fundamental basis is the idea that if the Bible says something, it has to be considered fundamentally doubtful unless there is some kind of independent corroboration.  This is what is euphemistically called a “Hermeneutic of Suspicion.”  In this, critical scholars wantonly dismiss or outright ignore conservative refutations of critical presuppositions, and constantly move over the horizon the goalposts for what could be considered corroboration of orthodox understanding of Scripture.  In other words, critical scholars have tried to rig the system in their favor of what can be deemed Truth.  Admittedly, they have had success in establishing their views in institutions as a kind of “new orthodoxy,” but the fact their views have been demonstrated consistently over time to be internally contradictory and largely self-refuting highlights only their inadequacy against the “old orthodoxy.”  If anything, the old orthodoxy regarding Scripture and the historic Christian faith has held up remarkably well under the assault (despite the inclination of many Christians to surrender the bastion peremptorily).

What critical scholars have done in the realm of biblical scholarship has found parallels in all intellectual disciplines, not just in religion.  That has created the current crisis of confidence in knowing.  The Enlightenment optimism that we could construct a sound, autonomous way of knowing ran into a dead end philosophically in the 20th century.  Contemporary philosophers have spent a good amount of time pointing out all the problems one will have in trying to have any certainty in knowing when we start from ourselves autonomously.  That exercise now goes under the moniker of “post-modernism,” but that is really is a misnomer: “post-modernism” is not so much a cogent philosophy following modernism, as it is modernist philosophy throwing up its hands and saying “This doesn’t work”—though not wanting to give up the allure of the idea that man working from himself alone can have a sound basis for knowledge.  What we get at the end of the day is the idea that beliefs need not be undergirded by any justification—the old way of thinking by both pre-Enlightenment and Enlightenment thinkers—but are simply asserted or imposed by whomever has power.

That mentality is toxic to understanding truth as an actual reality, and it is a fever swamp for cynicism.  Add to this two World Wars and a Cold War in the 20th century—okay, three World Wars—and you pretty much have shattered any remaining confidence in secular authorities and institutions as well.  Long before Hillary and The Donald came along, we had academic nihilists wanting to critically question everything, “edgy” cinema wanting to subvert traditional mores, and satirists of various stripes casting aspersions with a cynical “we know what is really behind the curtain” mentality.  With truth under assault from so many different directions, it should not be surprising that people will develop the counter response of “I’m going to believe what I want to believe because I want to believe it.”  That mentality is tolerable until we run into someone else’s “truth” which we don’t like.  If Truth is shattered, then three experiential absolutes will emerge: power, pain, and pleasure.  And that, of course, has social ramifications.  It means that everything comes down to a struggle for power.  Everything is now political.

So (to use a phrase from the Eagles’ “Hotel California”), how do we find the passage back to the place we were before?  This is a hard question to answer.  The essence comes down to reestablishing an acceptance for the idea that there is genuine truth, and along with that, for the notion of legitimate authority.  I think that the means for reconstituting those ideas does exist within the Christian community.  I don’t think secular society will be able to do that, committed as it continues to be to the notion that man himself is the basis for all knowledge and all authority.  What that means is that the Christian community will have to reestablish the idea of truth at the same time that society is increasingly convinced that any notion of truth is merely a play for power.  You can bet money that that will result in some conflict.

Because we as Christians have been shaped by the world around us as well, reconstituting an idea of Truth and authority is going to some changes in our mindset as well.  It will mean being self-conscious about how we know what we know and why we accept that as true.  It will mean not only reestablishing the idea of the Bible as the final epistemological authority for our understanding of all things, but also of Christian doctrine as the norm for what we are to believe concerning God and how we are to live. Lastly, any reconstitution of the idea of Truth and authority will mean accepting the Church as authoritative for both nurturing the Faith and binding its members to the Faith.

Not all of these things will be easy to accept, since an acceptance that there is Truth and Authority outside of ourselves necessarily means that we are not in control.   That said, are we really better off with the alternative, that is, that “…Every man did that which was right in his own eyes”?  I don’t think so.

Latest on the Sister Site: Tides and Covenants

Should We Celebrate Ascension Sunday?

Forty days after Resurrection Sunday and ten days before Pentecost Sunday is technically the Day of the Ascension, when Christ was assumed to Heaven to sit at the right hand of God (see Acts 1:9-11). In the medieval church (and in the Roman Catholic Church to this day), this was typically considered a feast day. […]

Van Til and Machen